Rising up from the jungle below stands Sigiriya, means “Lions Rock” preserved as a UNESCO World Heritage Site and it is considered as the Eighths wonder of World. This mighty 180m high fascinating Rock Fortress was the stronghold of a 5th Century (477-495 A.D) King- Kasyapa who murdered his father. Sigiriya is World famous for its entrancing frescoes painted on a sheltered rock pocket, remain only 19 out of the original five hundred. Sigiriya is one of the best preserved examples of ancient planning and a monument to the ancient advanced technology and architecture of Sri Lanka. Equally marvelous are the high glosses Mirror Wall (inscribed with ancient graffiti) the Lion Paw and the water gardens. The gardens of Srgiriya city are one of the most important aspects of the site as it is among the oldest landscape gardens in the world. The gardens are divided in to three district but linked forms water gardens, caves and boulder gardens and terraced gardens. Sigiriya later became a monastic refuge with Buddhist monks living in caves at the base of the rock. 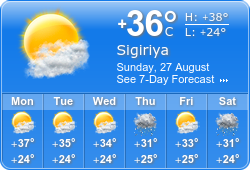